rwv37 hasn't added any friends yet.

Do flowers not respond to Motivate Land? I've cast it a few times on a certain patch, and every time, crystals vaguely near the flowers grew, but the flowers themselves didn't.

I started upgrading an ancillary, and then put it out of my mind and went about other business.  Eventually, it gradually dawned on me that it seemed like the upgrade should have completed already, but I hadn't seen a message for it.  So I looked at the building again, and it was at 97% completion, with no remaining resources necessary.  I figured it was just about done.

But then something weird happened:The next time I checked the building, it was 97% with one stone needed.  I thought maybe I had been misremembering the "no resources needed" thing.  But anyway, I now actively watched the building (as opposed to checking in on it every so often).  What I found surprised me:

Somebody eventually delivered a rock.  The building went to 97% with no resources remaining.  Then somebody came and took away a rock.  97% with one rock needed.

This pattern repeated several times.  Someone brings a rock, someone else takes it away, over and over.

Then it occurred to me that I had turned on "don't store rocks in this building" for it (the stronger version - i.e. "remove any that are already there").  I assume that's what's causing this behavior.  Unfortunately, I can't change that setting - when you're upgrading a building, the storage options are unavailable to you.  So it seems like I have this ancillary that is perpetually being built.  Maybe eventually a builder will sneak in there before somebody takes the rock away, but who knows.

Just curious - does anyone use any of the brush shapes other than square? If so, for what?

The only time I use non-square shapes is by accident.  At one point I thought I would use the circle to clear out an area around a building corresponding to its range, but the limit on the brush size turned out to be too small for that.

It sure seems like stone golems don't attack slime pits.  Several times, I've watched marauding armies of stone golems go into an area full of pits, gradually destroying the fire pits and the graveyards one by one, until nothing is left but a bunch of slime pits. At that point, the stone golems just go idle or go somewhere else.

Oh, wait, and now that I think about it a little more, really I only know that ice stone golems do it.

Please allow scrolling farther into the black voids at the edge.  I like having the problem panel open almost all the time, but it gets in the way when you're scrolled as far right as you can be.  It would be nice to be able to scroll a little farther, so that it's over the black instead of taking up a large portion of what you're trying to look at.  Example of what I'm talking about: 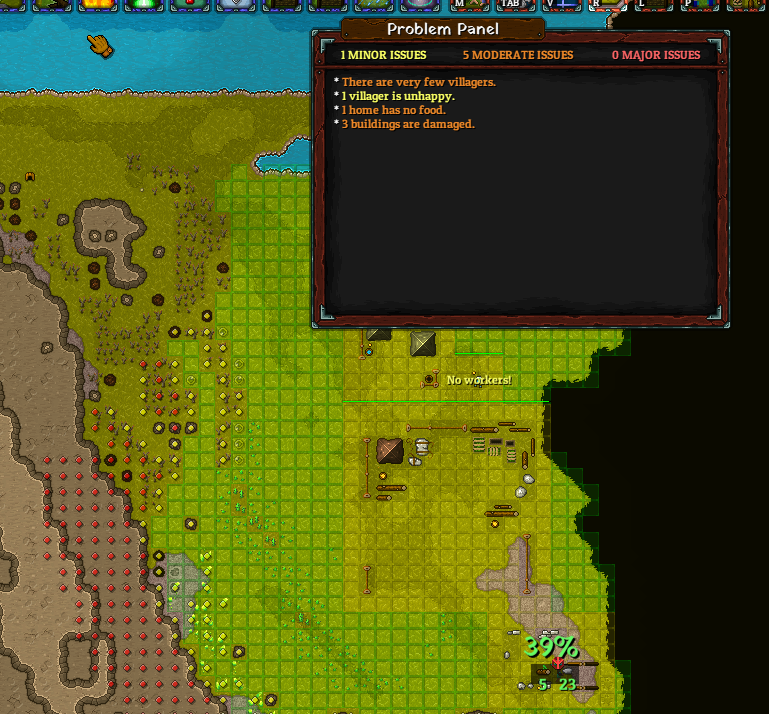