I find it HIGHLY unprofessional that you would post my review here for active fans to troll with negative comments, rather than leaving the comments here to the forums.

You and your fans have been harassing me for a month over a single negative review. Thus the deleting comments.

My negative review stands. As far as context goes, it remains here for anyone who decides to check out the forums direct links are unnecessary and unprofessional. Especially since Steam does not want ANYONE posting outside links in the comments.

You do realize that by posting your opinion on an open board you've invited others to discuss it? I don't know if you've actually been flamed by people via private messages or not, but no one here is abusing you. You're playing the victim while attacking Ray for sticking to his vision of the game. Lore was never a strong focal point of the game, and as he mentioned, it can be tacked on later. You're focusing too much on one flimsily-explained mechanic (non-villager Catjeet being ignored by monsters) in a game that hardly has any explanations— just mechanics that can be given lore fluff later.

I like to believe that the Catjeet merchants are ignored because they don't belong to permanent settlements. The monsters only start to appear around settled areas. Perhaps the Catjeet work alone, and their individualism/lack of dedication to a "cause" or "home" makes them not apparent targets to a bunch of creatures that may not have eyes, ears, etc. or a need to eat. My point is that it's not difficult to apply your imagination to unexplained phenomena.

If you've played for 250 hours and consider flaming the dev to be "helping", you've definitely gotten more than your money's worth. Personally, I'd remove that negative review and wait for the game to actually have any lore before attempting to judge it based on that, but that's your choice. The rest of us will keep enjoying the developing game and give suggestions as to the course of the game's development instead of attacking Ray for being "unprofessional" because some things aren't fleshed out and the game won't be tailored to our individual visions.

This post reeks of something. Sounds like you had fun and maybe got bored? That happens, you know? What I'm really curious about, is how you can propose that the game has "became a failure", despite the fact that it has an above 90% approval rating recently. I'm really puzzled on how you came to this conclusion on the behalf of the 90%.

On a side note, your "developer husband" (that was a joke, right?), should have a look at the actual code before accusing something of having "amateur programing". Get a grip, and have fun in your future games!

For what it's worth, I too would like to see a little more lore, please:

And lo, on the third day, THE LORD said unto his high priestess Beverly Crusher, thou shalt deliver this My message unto My people, that they shall know that THE LORD thy god is a busy god, and that when He saith unto thee that a certain tile of thy tiles needeth a road, thou shalt build thereat a road.  Thou shalt not build thereat a path, except that thou shalt thence build thereat a log path.  Thou shalt not build thereat a log path, except that thou shalt thence lay down cobble upon it.  And it is an abomination unto THE LORD that cobble be not covered by board.  But when the board covererth the cobble, woe unto thee who neglecteth laying the stone upon the board, for knoweth thou that THE LORD thy god shall visit His vengeance upon thee, and upon thy progeny, yea, unto the seventh generation, driving thee out from Springland unto the wastes of Death Pass.  But thou who layeth the stone upon the board, THE LORD thy god shall surely visit thee like a catjeet bearing gifts in the night, bestowing upon thee His blessings.

Here's a crashlog that I just generated:

Also, when the game crashed it reset my monitor calibration and I had to reload it. Probably not super important info, but just in case.

I have a comment, or two, to do about the builders

I have the feeling that they chat more than work x) I explain: They begin to build then they start to chat. And chat. And chat again before restart to build x) They spend 35-40% (maybe more) of their time to chat.

That's clearly for added realism! Although I guess it should be the road workers that chat the most... 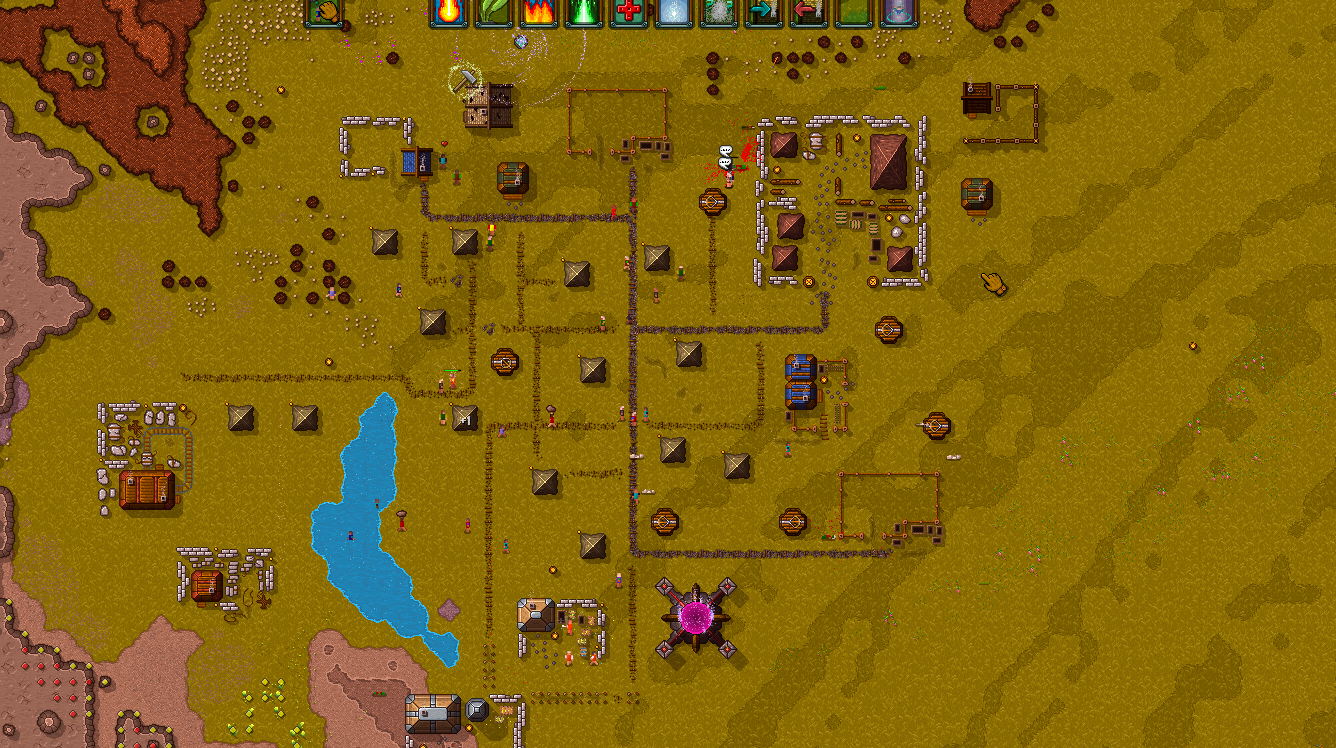 Putting the roads to good work!

This guy REALLY wants to attack my village. Also his name is amusingly appropriate

Let's not get too overboard. We need to keep it balanced.

- Fixed the female villager names in the bottom pop out GUI for the building worker lists. They were incorrectly formatting the name and cutting off the first character.

Glad to see you're fixing lower number of letters in female names as opposed to male names. Equality for all.

Well If anything i will see about continuing to catch the bugs on OSX.

What are you intending to add in next update?

"It has been decided: Retro-Pixel Castles InDev 11 will be all about adding mobs and enhancing/overhauling the AI!"

Which is PRETTY AWESOME

- Placed some buildings and structures.

If you are starting in stupid location like on an island, just restart the map. Download [This version will only work on "inDev11 Unstable 5" or greater]: