Stockpile Rations Goal Progress Bar Error
No replies to this topic - Started By popcorn, Oct 19 2019 12:20 AM

The progress bar for the goal "Stockpile 170 Rations anywhere!" is broken. I have around 120 rations in one region with ~40 of those in storage, but the bar on the goals screen is empty. There also appears to be part of a green bar to the left of the goal panel (see image).

I tried entering the region, allowing the cooks to make a couple rations, then returning to the world map. This didn't appear to affect the progress bar. Fully exiting and restarting the game also had no effect. I'll update this once I know whether the goal can be completed despite the error.

[Edit] The goal successfully completes at 170 rations total, so this appears to be just a visual bug. The progress bar in the panel once the goal is completed appears consistent with other completed goals. 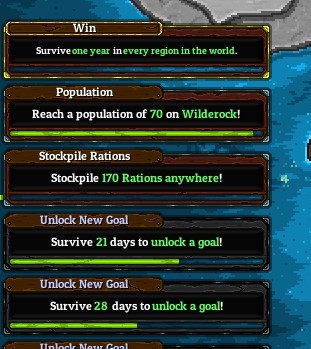 Also tagged with one or more of these keywords: goals, bug