-This is a challenge page for those people who just aren't satisfied with normal play. so here I have compiled a list of some challenges that you can use. Also as a side note, if you have any challenges to add then just post in the comments and ill update the list when I can.

the next update of the game will include world map "challenges" for each map that you have to complete... (sorta like map goals)  although this means that some of these could get into those map goals. this is really the main reason I've made this list and i hope some of these may be able to get into the game officially. although if you have a challenge you don't see here then please add it... i will read them every once in awhile and see what i can do to credit you in the list and add them with your name if they are unique enough...

all i'm saying is that this place is still open and that i'm still accepting requests. so if your up for it then please see what you can come up with and what you might even want to see as a map goal if were lucky... anyways thanks, but that's all i have to say...
thanks for reading     ~shade~

RtR Challenges:
challenge1 (MapControl): have a working base in each sector of the map (In game Final goal)
Challenge2 (CatjeetTakeover): Convert every Vill in your base to a catjeet including children
Challenge3 ~ZEDIAH / NANABA / YIN~ (absent god) you cant interact with the villagers at all using spells or grabbing or even helping in any way... just build and watch what happens.
Challenge4 ~Tiberiumkyle~ (Pacifist): Don't kill any entity in game ever yourself... killing spells and everything else is banned and grabbing them to be killed is also not permitted.
|  Challenge5 (MilitiaDefense): Don't use any towers in your defense, only combobulators, walls, and barracks are allowed
-|  Challenge 5+ ~Mckloshiv~ (NoWall-MilitaDefense): Don't use walls either with your defense
L Challenge5++ ~Amarae~ (NoCombob, Malitia Defense): Combobulators are not allowed either... just guards.
Challenge6 ~Merlinsfan~ (Spelless): Never use any of the 5 god spell icons in game... none of the 5 are allowed to be touched and used in any fashion.
Challenge7 (Energy-free): Don't use essence collectors at all in your base
Challenge 8 ~Jan~ (NoDeath):  no casualties of any kind, except for the special case of dying of natural causes... that is the only kind of death allowed
Challenge 9 (SpellLocked); You choose five spells for your hotbar in the beginning of the game and you can only use those spells for the rest of the playthrough of that map
Challenge10 ~Soft Feather/Winter~ (NoUpgrades): you can't upgrade any building in your village at all. The only exception being the ^Village Center.^
Challenge10+ ~Tiberiumkyle & Amarae~ (BaseLevel): Exception of Village center is no longer available.
Challenge11 ~rwv37~ (UpForHire): Every available type of job is assigned one and only one villager, and no other villagers are allowed in the population.
(don't use extra vills and either throw them in the cullis gate or keep them around... )
Challenge12 ~rwv37~ (LonelyVillager): Only one villager is allowed at a time.  If you want multiple jobs to be done, that villager has to switch back and forth between job types. and all extra villagers MUST be thrown in the cullis gate
(If the villager dies, you are sorta screwed but oh well.)
Challenge 12- ~Winter Flare ~ (Family of three) you get 3 villagers instead as one water master, one farmer, and one builder... (doesn't have to be that really) but you get doggos also and that's it. every other villager/catjeet villager is thrown in the nearest cullis gate.
CHALLENGE 13 (NoDefense): You are not allowed to build any building within the defense tab at all... this includes, Towers of all types, guard buildings, golems, lightning rods, and anything else within that tab of buildings...
tool and armor smithies are allowed and walls are also... but anything else in the defense tab is not.
Challenge 13+ (HELL) no grabbing enemies/ no throwing them in cullis gates, and no defenses as before... (will still allow walls and other things to give you "some" chance)
%Tips%
- It is encouraged to COMBINE challenges for more challenge and it makes it more "fun"
-pick the difficulty you want, but know that the higher the difficulty in game the better the status of winning it
Special Challenges:
SPECIAL CHALLENGE1: ~ZEDIATH / NANABA / YIN~ (Sub Zero Wins! / Scorpion Wins!)
- You may play the game in any way that you'd like with only one exception: You may not construct a barracks or walls. The only walls you may construct are curtain walls.
- You may construct tower/golem defenses with one exception. You may only build towers/golems one at a time and as you construct one you MUST fully upgrade it to either fire or ice before building the next defensive structure. Once you choose to fire or ice for your first defense ALL other defenses must have the same upgrade.

Spells are dependent on which defensive option you choose:

Here's the file to drop into a custom world for my special challenge, if you want to minimize digging into the files yourself. 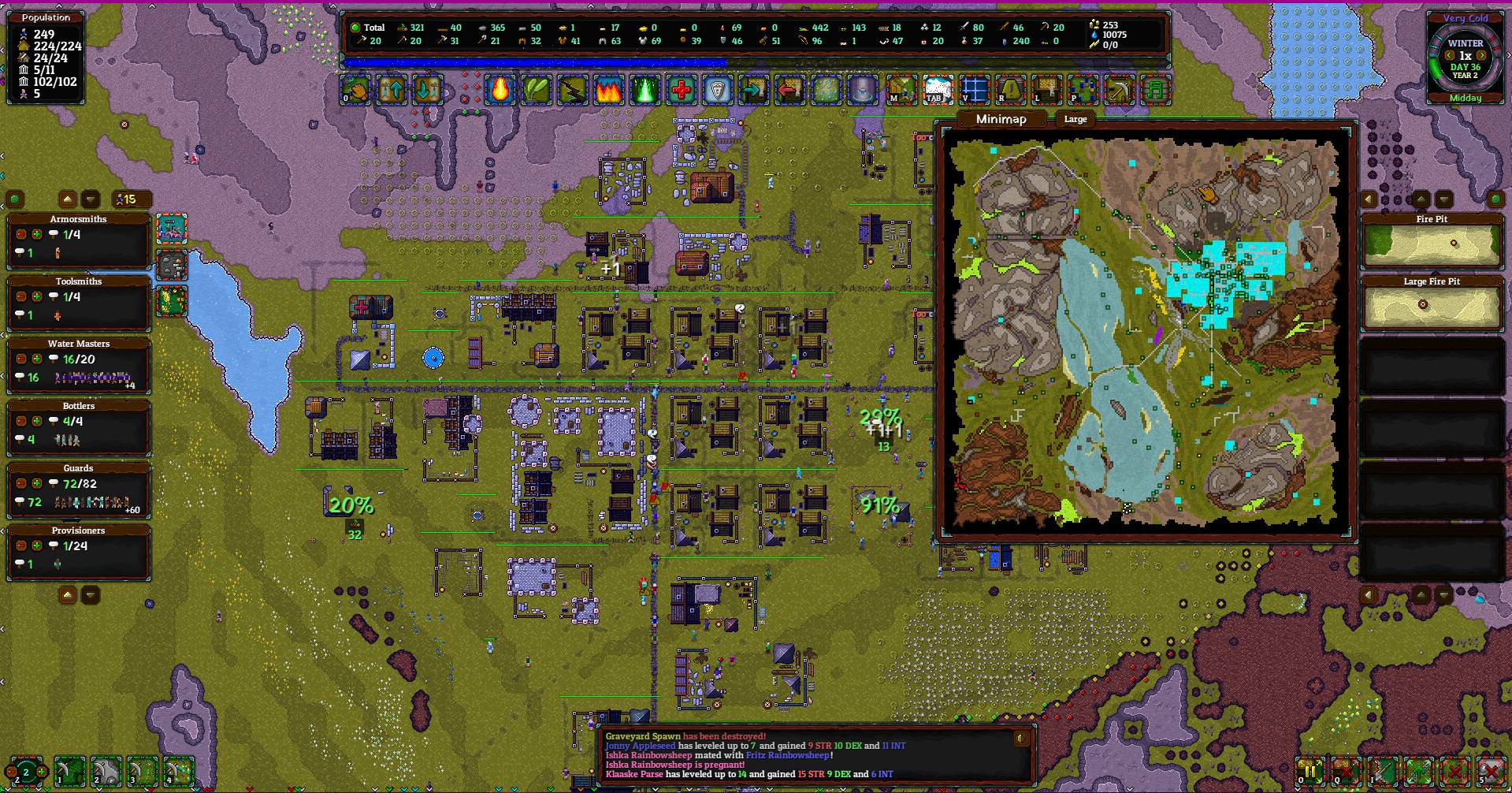 Completed my own challenge (5++), no Walls, Towers(including T3 Outposts/Barracks) or Combobulators (Including holy golems) on Survival difficulty.

Also completed the #7 "Energy free" challenge, did not build a Harvestry/Crystillery/Collector.

Two things I've done, neither of which I noticed in this list:

(1) Every available type of job is assigned one and only one villager, and no other villagers are allowed in the population.

For example, when you place your campsite, your only available job type is builder.  So you assign one and only one builder, and you zap all of your other villagers to Limbo.  Your villager eventually builds a farm, so now farmer is available.  You therefore bring one and only one villager back from Limbo, and assign them as your one and only farmer.  If you later build another farm, that's great, but you do not get a second farmer.

If a villagers dies, you are allowed to bring in a replacement for them.

(2) Only one villager is allowed at a time.  If you want multiple jobs to be done, that villager has to switch back and forth between job types.  if the villager dies, you are allowed to bring in a replacement.

Should have explicitly said: In either of those scenarios, if nomads come in, it's OK if they join the village, but you have to zap them (and/or existing villagers) to Limbo ASAP in order to get yourself back down to the population limit.

OOH I LOVE THIS CHALLENGE

thanks ill make sure to quote you as an idea creator but ill add it thanks...

Edit: ok it's been added.

anything below this i have yet to read yet... soon i will get to this and see about adding some challenges that may be here.

Back to General Discussion


0 user(s) are reading this topic