So, I've almost all of my time since purchasing this game, buried in the game, experimenting with mechanics, building a village, and generally falling in love with the game. The mechanics are solid, the gameplay is difficult, but still feels fair- the threats are just varied enough to still be exciting, just predictable enough so that you feel like when you screw up, it was probably because you did something wrong. However, having gotten late-game in one of my villages, I've run into a bit of an issue- Mana.

It's an interesting duality here. I'm constantly maxed out in terms of mana storage- I've devoted all my ancillaries' build caps to making essence pools- but I'm constantly maxing it out. Might have something to do with my wall of Cullis gates, and how I drop any enemies that dare approach my village into them? But other than my internal towers, a massive golem foundry, and some crystal motivators to go with it... There's not much for me to spend the Essence on, except for the occasional earthquake, or motivate land. Or swarm of meteors.

I have a solution for this issue- but I think it might be a bit hard to implement. Not sure, though, I'm only just starting with coding courses. But, that solution is: Automation.

Now, I'm not sure how well that would fit with the theme of the game, but I was thinking that there could be some basic​ essence-powered automation in the game. I've tried setting up a "conveyor" of sorts, made out of Attract towers, but it always ends up derping out on me- so why not add in an actual conveyor system? Make an input and an output- portals, maybe, that use a decent amount of essence per item transported, but it's instant- or maybe actual conveyors, where you could drop an item onto it at any point, and it'd drop it off somewhere else, where you pour Essence into a central "hub" building that powers all connected conveyors? Not sure.

Or perhaps, maybe something like the Holy Golems, or golem combobulators that make golems specifically for certain jobs around the town- mining, harvesting crystal, forestry... General low-skill jobs, to free up your villagers for other things? I'd imagine that they'd be more expensive than your average crystal golem, and might only last a certain amount of time before you have to create a new one- but it would be a good boost to the economy.

My final idea, though, might be the main one I had in mind. Instead of automating resource gathering, what about resource processing? Automated stone-cutteries, lumber-mills, crystilleries, forges, things like that- where, instead of using manpower, they use essence for every item processed?

Like I said, not sure how hard this would be to implement, or even if it would fit into the theme of the game, but... growing up from an absolutely basic camp, to a sprawling city, to a magepunk paradise where none of the citizens need do anything more than lift a finger to have any and all needs taken care of by an army of shiny golems... Sounds like a dream. Not to mention the difficulties that would come from all your villagers having no work to do, and therefore lazing about and sucking up resources for no real benefit to the town except happiness increasing..

On a more philosofical note...

That final paragraph you wrote... 'from a basic camp to a magepunk paradise where nobody lifts a finger'

That right there, that is an amazing metaphore for actual human history haha.

Humans as a species have spend so much of time and effort building what we have now.

Only to end up as a species of relatively happy meme-consumers that don't have to lift a finger haha.

Wall of cullis gates, that sounds interesting. Screenshot of your setup?

Automation would certainly be cool.

With regards to mana, I usually clear up the map by destroying spawn pits and recalling the resources, that takes up quite alot of mana.

One question: how on earth do you manage the lag if I might ask?

I am at 200 pop, have a relatively high end system, yet I am afraid to go over 200 because of the lag spikes I get.

As a reference, I can play Ark survival evolved at the second-highest graphics settings seemlessly.

The population lag is due to all the AI in this game eating up CPU power. RtR doesn't need much, graphically, but the AI, yikes. Need a good cpu.

As for cullis gates... Don't even need a wall. Just one, and lots of lightning rods. 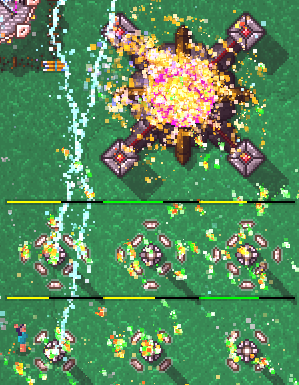 I'm quite pleased with the implementation of summonable labor golems in the current stage of the game, and especially​ the "Conjure Resource" spell- but I've come up with a few more​ ideas for the game!

Firstly, I was thinking about what use there was for gold. Sure, you can make it into coins for use in the market, but that's the only thing I know of so far. What if Gold was used in more magically-focused things? Crylithium, Gold Ingots, and Cut Stone, for example, might be used to make something like... A magic wall? Place down two points and, if they're in a straight line from each other, they'd draw on essence in your essence pools to form an unbreakable barrier? The barrier would draw aggro, maybe, but it would take essence based on how much damage was dealt to it- and the corner pieces themselves could be destroyed, since they're fully physical?

What about using Gold in the creation of special magical items for your villagers? Mage staffs, and such? Or a special type of Golem Combobulator that uses gold ingots to make gold golems, possibly bound to a Wizard that works at it, so you could have a mobile healer, or a villager that could cast basic spells at enemies, with tanky, expensive Golems to guard him?

Or maybe just make purely aesthetic GOLDEN WALLS, because if you're like me, and run a mining town.... you end up with large storages full of gold ingots, and nothing to do with them.

Or maybe just make purely aesthetic GOLDEN WALLS, because if you're like me, and run a mining town.... you end up with large storages full of gold ingots, and nothing to do with them.

Not to forget the golden floor which we want to walk on. Gold really needs some more effective usages.

About the mana-thing, I don't think that automation is much of a thing. This sounds too much like a economy simulation and if you compare the labor effort, processing items is just a small part of work.

For getting a better way of melting mana, I would like to see a way to make worker golems permanent. This could be solved by a special healing tower just for worker golems with a higher range, which allows golems to act as a villager in its range as it gets healed permanently by the tower.

Another luxury thing could be the 'magic walk'. A path upgrade which increases walking speed at the cost of mana per tile walked per villager.

Last, but not least, every building could have a small mana pool itself, which boosts its effectivity while soaking mana. This should pe toggleable for every building.

Also tagged with one or more of these keywords: Suggestions